A Visit to Chaosium

Penny and I have arrived in America on the first stop of our 2013 GenCon Horror on the Orient Express tour. We have even taken our first train, the BART (Bay Area Rapid Transit). It did not have  a salon car where white-clad waiters served champagne, but it did get us out to Charlie Krank’s place in Hayward from the airport. We’ve since been recovering from our jet lag, eating some amazing vegetarian food in the Bay Area and playing some games. 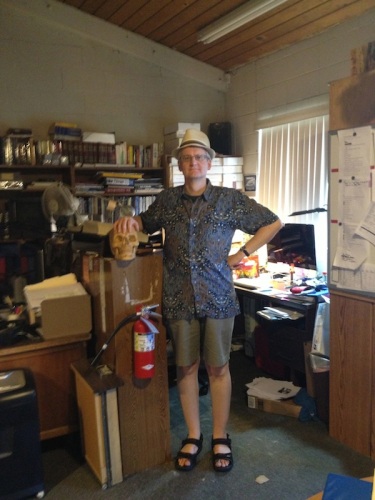 On Monday we visited the Chaosium offices, and for the first time saw a printout of the complete layout of Horror on the Orient Express, which Meghan has prepared to show everyone who comes to the Chaosium booth (#501) at GenCon Indy. It’s amazing to see the book printed out: a huge stack of paper larger than Beyond the Mountains of Madness. Meghan has done a fantastic job with the layout, and it was great to see the new art, particularly the new version of the Sedefkar Simulacrum, which is so blasphemous we can’t show you yet. We also met Nick, who showed us the Traveler’s Companion bound and printed up as a sample GenCon preview edition. We hope this little book that will be a useful player aid at the gaming table. It has a guide for each city on the route, accompanied by wonderful city maps by Steff Worthington.

We also got to go to the all-new expanded wing of the Chaosium warehouse to see boxes and boxes of Orient Express loot: T-shirts, medallions, commemorative coins, placemats, matchboxes, mugs, coasters and more. Chaosium have been sending out photos of all the merchandise as part of the Kickstarter updates, but it’s another thing again to see a massive wall of boxes. There’s so much stuff there you have to scale the front stack to get to the stack behind it.

The nearby row of mi-go brain cases made me wonder what if that’s what happened to previous writers who missed their deadlines, because I flubbed a few.

Assuming the vacant space on the bottom right is not reserved for me, we leave on Tuesday for the real world gibbering madness that is GenCon…

One response to “A Visit to Chaosium”