The Blog of Many Covers

This is the story of how books can go strange, far places, change their covers and yet stay the same.

In 2016 I was lucky enough to have a story included in She Walks in Shadows, the first all-woman Lovecraftian anthology, edited by Silvia Moreno-Garcia and Paula R. Stiles of Innsmouth Free Press. If you don’t have a copy of this you can get the e-book by supporting Silvia’s Patreon at the $2 level. Bargain.

She Walks in Shadows

Silvia started the project because people were wondering about the paucity of female writers being published in Lovecraftian anthologies. You can read her musings on the reasons on her blog page. Two years after publication the stories that stay with me are ‘Eight Seconds’, by Pandora Hope, which shows just how long a mother’s love needs to last, and ‘The Thing in the Cheerleading Squad’ by Molly Tanzer, a terrific retake on ‘The Thing on the Doorstep’. Silvia was a really wonderful editor who has gone out of her way to keep us in touch with the project as it moved through its various incarnations.

My story, ‘Turn Out the Lights’ was a speculative tale on the life of Sarah Phillips Lovecraft, Howard’s mother. The story is available as a free sample. She Walks in Shadows went on to win the World Fantasy Award for best anthology 2016, edging out Chaosium’s King in Yellow anthology, Cassilda’s Song, edited by Joseph S. Pulver.

She Walks in Shadows was reprinted in America (same stories, different cover) as Cthulhu’s Daughters.

The anthology has has now been translated into Turkish, and has yet another very cool cover. But, no I don’t know what ‘Golgede Yuruyen Kiz’ means either. I’m assuming it means She Walks in Shadows but Google Translate confidently tells me the word in the middle means ‘Screaming’. So let’s not go there.

She Walks In Shadows, in Turkish.

However perhaps 2019 is Chaosium’s year as they are releasing Sisterhood, edited by Nate Peterson. Sisterhood includes my story, ‘Unburdened Flesh’, a strange tale of a Venetian nunnery during time of plague. It was inspired by the alternative history which we created for Venice in Horror on the Orient Express, and explores the history of the outre Brotherhood of the Skin.

We’re all sisters, under the skin.

I’ve been in quite a few anthologies, but Mark’s favorite cover is from Tales of Cthulhu Invictus by Golden Goblin Press. The collection features stories set in Ancient Rome and the cover is a re-imagining of the classic ending of ‘Call of Cthulhu’ but with Cthulhu menacing a trireme. And for my part, I’m quite pleased with my story too, ‘Magnum Innominandum’, about a patrician noblewoman dealing with a little slave problem. Suffice to say it ends with madness, death, despair and toads.

Cthulhu is not amused.

In other literature-related news, another of my Horror on the Orient Express co-authors is also writing fiction. Geoff Gillan, who masterminded the plot for the entire campaign, has just started self-publishing his own new series, The Man from Z.O.M.B.I.E. This is the undead Cold War spy thriller you’ve been dying to read – just like the lead character. 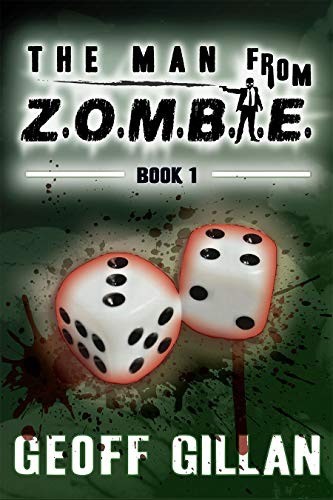