This week, I’m featuring some atmospheric photographs from our 1990 New England trip, accompanied by quotations from the Lovecraft  stories in which the location appears. So get ready to snuggle in and enjoy the scenes with a cup of cocoa, and do make sure the door is closed, and locked, behind you. It was closed, wasn’t it, a moment ago?

The Haunter of the Dark

Of all the distant objects on Federal Hill, a certain huge, dark church most fascinated Blake. It stood out with especial distinctness at certain hours of the day, and at sunset the great tower and tapering steeple loomed blackly against the flaming sky. – The Haunter of the Dark 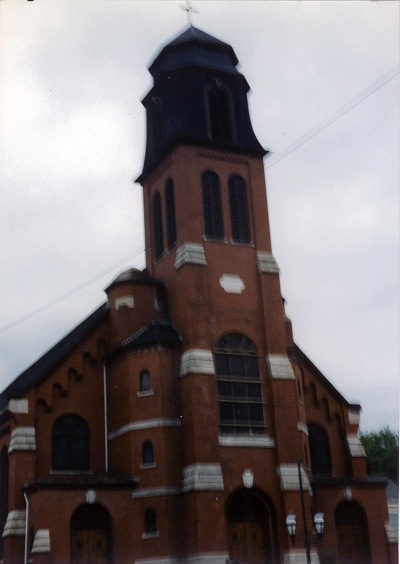 St John’s was demolished in 1992. Although I quite like the out of focus photograph, as if a  pictorial hint that all is not well, I regret that I’ll never be able to take a better photograph of it now.

The house was – and for that matter still is – of a kind to attract the attention of the curious…Benefit Street…was laid out as a lane winding amongst the graveyards of the first settlers, and straightened only when the removal of the bodies to the North Burial Ground made it decently possible to cut through the old family plots – The Shunned House

The house, as a matter of fact, still stands. I understand it recently sold. I hope the new owner  takes a genial view of curious Lovecraft enthusiasts peering in through the ground floor window in the hope of catching sight of a giant, pallid elbow.

Beside the road at its crest a still higher summit rose, bleak and wind-swept, and I saw that it was a burying-ground where black gravestones stuck ghoulishly through the snow like the decayed fingernails of a gigantic corpse. – The Festival

Though it pleased me, I would have relished it better if there had been footprints in the snow, and people in the streets, and a few windows without drawn curtains – The Festival

The photograph does not do justice to the  eerie subsidence in these New England graveyards, as though something was tunneling diligently beneath – but perhaps it is best if what this is remains something we must not and cannot recall.

And finally a last word from Lovecraft in a more reflective mood, writing of his beloved Providence:

I never can be tied to raw, new things,
For I first saw the light in an old town,
Where from my window huddled roofs sloped down
To a quaint harbour rich with visionings.
Streets with carved doorways where the sunset beams
Flooded old fanlights and small window-panes,
And Georgian steeples topped with gilded vanes –
These were the sights that shaped my childhood dreams.
– Background