In 1990 Mark and I traveled to Rhode Island and Massachusetts for Lovecraft’s centennial. In company with the redoubtable Keith Herber and his friend Rick we visited Salem, Providence, and several of the towns that inspired Kingsport and Arkham. Keith was at that time writing his landmark series of books on Lovecraft Country for Chaosium and we could not have wished for a more engaging travel companion; when we return to New England next month for NecronomiCon Providence we will miss his sly smile and ready laugh.

One goal of our trip in 1990 was to try to rediscover Lovecraft Country by visiting each of the towns he had used as the basis of his famous fictional versions. When we stayed in a low-ceilinged Salem guesthouse which had been continuously inhabited for 300 years we were half expecting to see Brown Jenkin scamper across the counterpane.

Most of Lovecraft’s invented towns were based on two or three actual towns, frequently combing the geographic location of one with the architecture or atmosphere of another.

Arkham is generally based on Salem, however Salem is a sea port and Arkham is inland. Lovecraft probably originally based Arkham on New Salem, a town in the Swift river valley, which became the Miskatonic. The nearby town of Oakham most likely contributed to the fictional name.

When proposals to dam the Swift river to create the Quabbin reservoir were proposed in the late 1920s, the ever-scrupulous Lovecraft felt forced to move his mythical town. Arkham became geographically identical to Salem.

The hamlet of Greenwich appears to be the inspiration for Dunwich, in terms of physical proximity to New Salem, although other, more rural towns were mentioned by Lovecraft as closer in spirit to its isolated “backwoods” atmosphere. Lovecraft, again for reasons of geographic accuracy, ceased to use Dunwich as a location once plans for the reservoir were mooted. 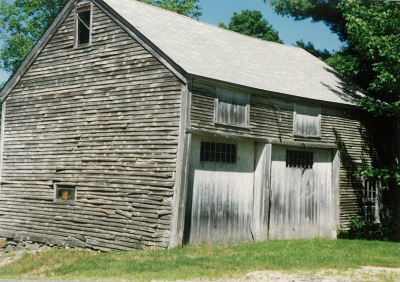 The Quabbin reservoir was eventually created several years after Lovecraft’s death in 1937, and Greenwich was indeed razed and drowned. The reservoir features, unnamed, in ‘The Color Out of Space’, where nothing will make the narrator drink the new town water of Arkham.

Kingsport is based on Marblehead and the nearby Rockport.

Innsmouth is inspired by Newburyport’s architecture, but geographically placed on the fishing village of Gloucester. Hence the narrator of ‘The Shadow Over Innsmouth’ gets on the bus at Newburyport and then travels to Innsmouth. 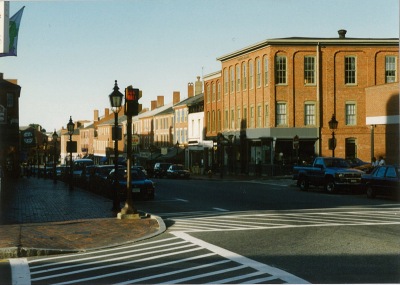 With thanks to the following eldritch tomes for refreshing my failing memory:

At the time I took some notes of the epitaphs on the tombstones in the Salem and Newburyport graveyards. The notebook in which I recorded them is long lost, but these days we have Wikipedia to fill in the blanks. It is fitting, for this post, that the last words belong to the dead:

Remember me as you pass by,
As you are now, so once was I,
As I am now, so you must be,
Prepare for death and follow me.

– Epitaph on a New England gravestone

Horror on the convention season 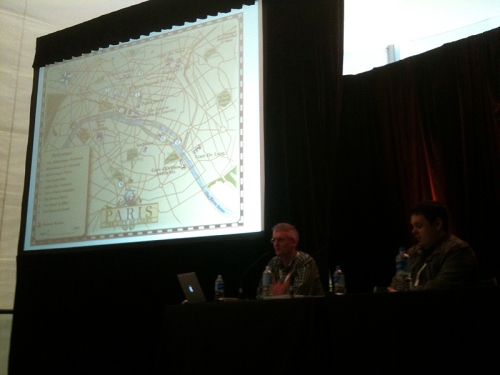 The manuscript is done. Done late, but it’s done. Now we’re laying out, tweaking and proofing, but at last the editing work is over. In its place, the convention scene has begun.

This weekend was the inaugural PAX Australia, and it was a beautiful thing. It’s the largest games convention ever held here, and the PAX banner brings in gamers of all stripes: PC, console, handheld and tabletop. Seeing the massive boardgames area, swathes of Magic the Gathering tables and the Pathfinder Society area booked solid was an amazing sight. I’m in awe of the efforts of the PAX Australia and US teams in staging this, with the sterling efforts of the local volunteer Enforcers in keeping everything so friendly and welcoming. It had an amazing vibe of gamers gaming together; everybody really would play anything, with anyone.

I proposed a panel on “Writing for Tabletop RPGs”, with an eye to encouraging other local writers to refine their work and take the step to get into print. I was joined by Patrick O’Duffy, one of the original writers of Green Ronin’s Freeport, and Matt Goodall, a homegrown winner of Paizo’s RPG Superstar competition. Between the three of us we have been published in around 50 RPG books over the years, and I learned tons from listening to Patrick and Matt (in fact, I really wanted to take notes, but that’s not the done thing when you’re on a panel!)

We talked about designing locations, so I chose Paris; I spoke about how research uncovers secrets about our own world and gives ideas for adventures. Marion Anderson (Orient Express author, and also The Cairo Guidebook) was able to get a few snaps of us talking away. So, up above is a sneak preview in a darkened room of Steff Worthington’s fantastic new Paris map (it’s the player version, so it’s spoiler free). That’s me on the left, Matt on the right, and Patrick is just out of shot.

I also ran an RPG session, the first time doing so at a con in many years; I ran A Cold Death, the free scenario I wrote for Pedro Ziviani’s  Mythic Iceland, which has just been nominated for an ENnie (go Pedro!). I played with brand new friends and Cthulhoid cultists Tristan and Eric from Adelaide, and we also kidnapped four players at random who were all fairly new to roleplaying. It was an absolute blast, and once they got into their characters and the story kicked in I completely forgot we were in the massive big top exhibition building surrounded by thousands of gamers; it was just us six, on a mountain in Iceland. That’s the magic circle that surrounds us when we roleplay, and why I still love this pastime after 33 years.

Anyway, I need the practice; con season has begun. Next month it’s GenCon Indy and then NecronomiCon Providence. I’m down for a new scenario at each, so break’s over, I have some more writing to do!

Gaming in the Big Top at PAX Australia 2013. 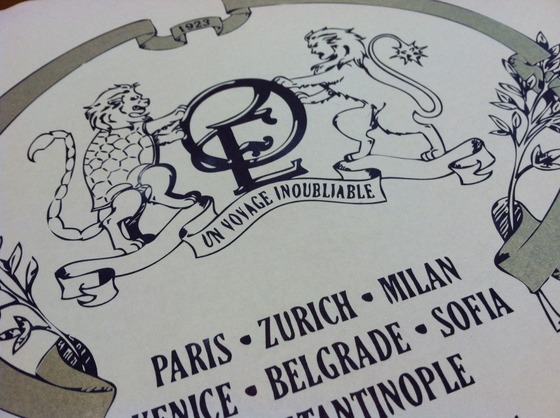 The Wagons-Lit logo is two rampart lions. For Horror on the Orient Express merchandise Chaosium under Meghan’s sterling art direction has created a new and unique logo, putting a fantastical spin on the traditional image and updated the two lions to a tarasque and a manticore.  The tarasque is a Provençal dragon and thus an authentic European monster.

According to my handy  Dictionary of Fabulous Beasts (Walker & Co. 1971) the tarasque lived on the banks of the Rhone near the town of Tarascon. It was “bigger than an ox…with a lion’s head and mouth; its jaws contained vast teeth, it had six bear’s paws, a carapace studied with spikes and a viper’s tail.”   The redoubtable St Martha, yet another Biblical figure who somehow found her way to Europe, tamed it by drenching it with holy water.

In case the description is not vivid enough a delightful Tarascon statue  gives a presumably authentic view of the monster, given that it is located near St Martha’s tomb. To my eye, it looks a little worried. We can assume that the statue depicts the moment after St Martha tamed it when the monster noticed the approach of the good townsfolk of Tarascon, who failed to trust in its wholehearted conversion and stoned it to death.

This week we were briefly excited when the pelaton in the Tour de France sped through Tarascon, but try as we might we could not catch a glimpse of the tarasque.

The manticore has an interesting lineage, born in Persia and making its way by rumor to Europe.  My Dictionary quotes Aristotle, quoting Ctesias (Alexander the Great’s personal physician, whose works are now lost): “the Indian wild beast called the ‘marticoras’ has a triple row of teeth in both upper and lower jaw; that it is as big as a lion and equally hairy, and that its feet resemble those of the lion; that it resembles man in its face and ears; that its eyes are blue, and its color vermilion; and has the faculty of shooting off arrow-wise the spines that are attached to its tail.” The same source notes that it can run as swiftly as a deer, no bad image for train. It is thought to born of garbled travelers’ tales of tigers. 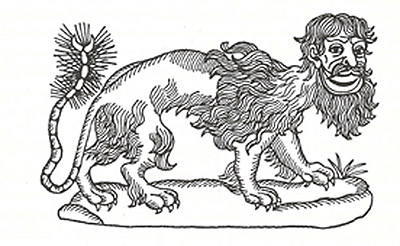 Filed under Chaosium, Library Use, Travel