The Pitch Has Dropped

Last April I speculated in this post on the Leiberesque qualities of the Pitch Drop. This University of Queensland experiment was set up in 1927 to illustrate that solids, under certain circumstances, act as liquids. Pitch was boiled and sealed in a vacuum over a funnel. Since then ever so agonisingly slowly, yet inevitably, drip by drip, the pitch has dropped.

The historical Pitch Drop, courtesy of the UQ website

The Pitch Drop has become the world’s longest running and some would say, most boring, experiment. At the time of writing last year, the ninth drop was trembling on the brink – metaphorically speaking, as time moves very slowly for pitch.

The Pitch Drop exemplifies Deep Time, that washes around our own brief lives and cannot be hurried or slowed by any human agency. Lovecraft would have loved it, I am sure, as Deep Time features so constantly in his stories. In one of his letters he dismissed the entire span of human life on earth as (cosmically speaking) an ephemeral accident. 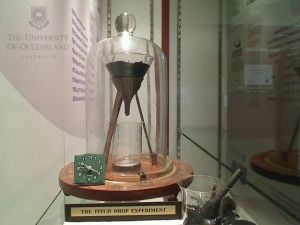 Professor John Mainstone was custodian of the Pitch Drop for fifty years yet missed all three drops that occurred on his watch, once by mere minutes. How’s that for cruel irony? And here’s a crueller blow. The ninth pitch drop has finally dropped. However Time had already intervened with stately finality for Professor Mainstone, who died in August last year. Sadly, the pitch drops for no man.

On this note, alert readers will notice in the photograph above that the nine previous drops have now been removed, to give the tenth drop a good long run-up. 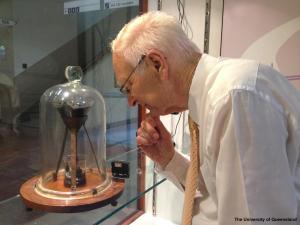 The late Professor John Mainstone and his nemesis, courtesy of  the UQ website.

The good news is that the current custodian, Professor Andrew White, describes himself as just “four pitch drops old”, thus showing the right mind set for the job.

You can see the Pitch Drop by live feed here. You can also join the band of devoted enthusiasts who are now waiting for the tenth pitch drop. Their motto is “Keep Up the Watch”. Their optimistic credo: “Only 14 or so years to go”. Just remember that as you watch the pitch, the pitch is also watching you.

It is of course a natural jump from time to trains. Check out this beautiful replica of a 1919 Orient Express dining car. Again, alert readers may notice a little something odd, especially about the scale and the interior.

Yes, the heroic Henrik Hoexbroe has painstakingly created a 1919 Orient Express dining car, inside and out, in Lego.

Thanks so very much to our friend and fellow Horror on the Orient Express writer, Phil, for sending us the link. It really only needs a little Cthulhu and a few Lego figures with arms stiffly poised in horror, and expressions of tiny terror on their faces, to make the illusion complete.

You can see more of Henrik’s beautiful train on his Flickr page, along with other  train equipment and paraphernalia, all painstakingly re-created in Lego. This degree of exemplary craftsmanship, as well as tolerance of extreme eyestrain, shows a loving patience worthy of the tenth drop.

Filed under Fun, Library Use