So for some reason Mark and I have been playing a lot of Ticket to Ride Europe. 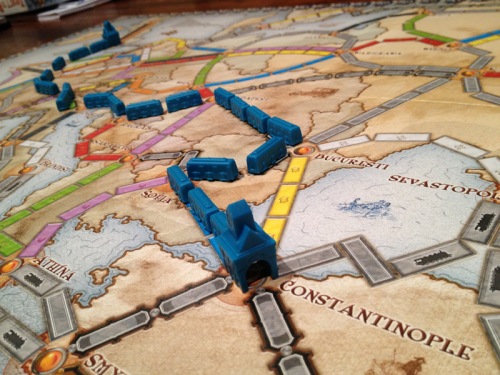 Take the blue train from London to Constantinople

Tagged as board games, Days of Wonder, Ticket to Ride

So you may have been wondering about our header photo. It is Sirkeci station, the grand terminus of the Orient Express. This photo is from a trip that Mark and I took along the train route in 2010 from London to Istanbul to celebrate the 20th anniversary of our writing about the train. 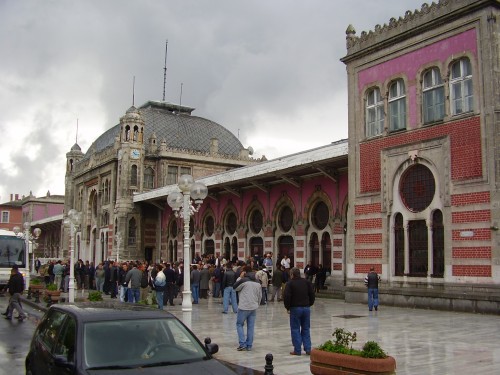 Let’s face it, most big city train stations are approached through industrial estates. Sirkeci has to be one of the best situated stations in the world. To my mind its only rival is Venice’s Santa Lucia, where the unsuspecting first-time visitor walks out of the terminal to find the sea lapping at the edge of the station piazza. The sea! Will you look at that? Okay, it’s actually the Grand Canal, but it still smells pretty salty and really cements the impression of Venice as a city built on water. I think Istanbul and Venice are two cities that are best approached by train. 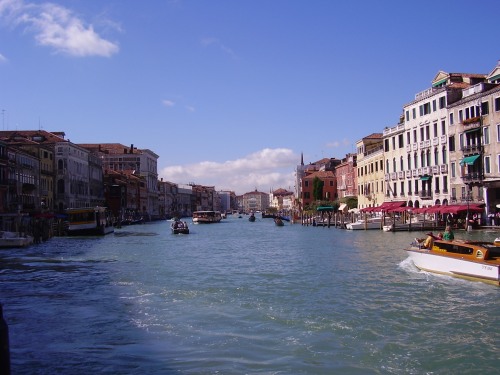 The Istanbul train enters the city along the shore of the Sea of Marmosa. The tracks pass Istanbul’s land walls – never breached, ladies and gentlemen, if you don’t mind a short history lesson – and still mammoth in ruin. 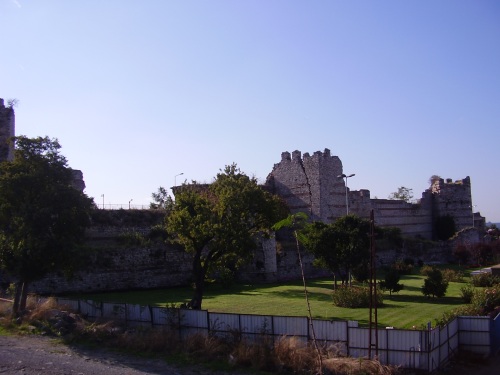 Then the train passes around the Golden Horn along the Bosporus, passing a jaw-dropping  array of beautiful buildings, the Topkapi Palace, the Blue Mosque and the Aya Sofia. Istanbul’s apartment buildings pile up over the surrounding hills. It is a breath-taking entrance, even when bleary-eyed in the morning after a day and a night on a ramshackle yet lovable old train, including standing in line after midnight for an entry visa at the Turkish border.

Sirkeci station was built in the 1880s and according to the guidebook is one of the most famous examples of the European Orientalism school of architecture. Apparently is also holds a train museum, which Nick and Meghan visited on their research trip but we somehow missed. Instead, we found this oddly pathetic train, stalled out front the station forever, but never investigated further. 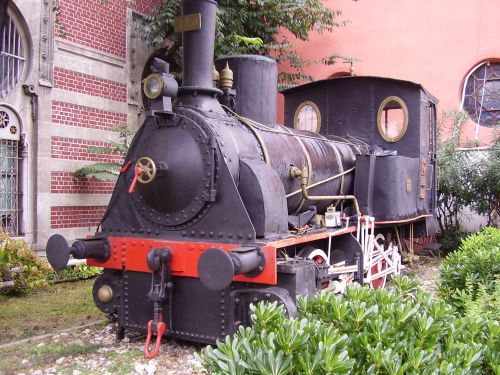 This train is not going anywhere

From Sirkeci station, if you turn right you cross the Galata Bridge to the Pera Palace hotel, beloved of the wealthy Orient Express passengers. If you turn left you’re in the heart of the Sultanahmet district. There you’ll find yourself slapped down in the middle of all that gobsmacking architecture you glimpsed from the train; the Blue Mosque, the Archaeological Museum, the Aya Sofia and the Topkapi Palace. If you keep going, assuming you can walk past the Basilica Cistern (and who’s going to resist going down to peek at an ancient  spooky columned cistern full of dark water and giant carp) you will trip over the Serpent Column and run smack into the last standing wall of the Hippodrome. Seldom has one train station offered entrance to so much.

Sirkeci station is at the heart of all of the scenarios in the new Horror on the Orient Express; the investigators will arrive or depart from the station in the Gaslight, 1920s and modern eras. There are some evocative departure scenes in the classic 1974 and superior 2010 versions of Murder on the Orient Express. Alas, we flew home to Australia from the charmless airport instead.

The Dream Cities of Istanbul and Providence

A seat is now empty, but the train moves on. Let us follow Randolph Carter, and journey in search of cities lost in time and dreams.

As part of my research for the Traveler’s Companion, I’m reading Orhan Pamuk’s Istanbul: Memories and the City. This isn’t the place to talk about Pamuk’s stature as a writer. It is Pamuk’s Istanbul that I am concerned with here, the city of his childhood in the 1950 and 60s, and how this can be related back to a Lovecraftian experience of Istanbul in the 1920s.

Pamuk evokes a city of winter, of darkness, of shadow, of twilight, of gloom and poverty. He lingers lovingly over every detail of the slow ruin of the grand old mansions lining the Bosporus. Pamuk’s city is permeated with an aching consciousness of loss, huzun,  a Turkish word he re-interprets as a communal melancholy suffered by Istanbul residents, arising from a deep awareness of their city’s fall from greatness.

Lovecraft’s twilight city, his dream Providence, is a fleeting glimpse filled with ‘the poignancy and suspense of almost-vanished memory, the pain of lost things, and the maddening need to place again what had once had an awesome and momentous place.’

These are two very different writers confronting the same vision, and both writers assert the primacy of their dream city over the reality, to the point where reality shadows the dream. At the time of writing Istanbul, Pamuk had never left the city, and indeed had returned to live in the same apartment building that he lived in as a child. He felt the city fed his imagination and he would lose too much if he left. Lovecraft stayed in Providence and on College Hill, apart from a short unhappy stint in New York. He could not abandon the city that stood at the center of his craft. His tombstone reads, simply, ‘I am Providence.’

Pamuk also collected newspaper columnist jottings, some of which he shares in a chapter of Istanbul. Here is an admonition from our period, 1929, a final word on lost places and lost times:

“Like all the clocks that adorn our city’s public spaces, the two great clocks on either side of the bridge at Karaköy don’t tell the time so much as guess it; by suggesting that a ferry still tied to the pier has long since departed, and at other times suggesting that a long-departed ferry is still tied to the pier; they torture the residents of Istanbul with hope.” 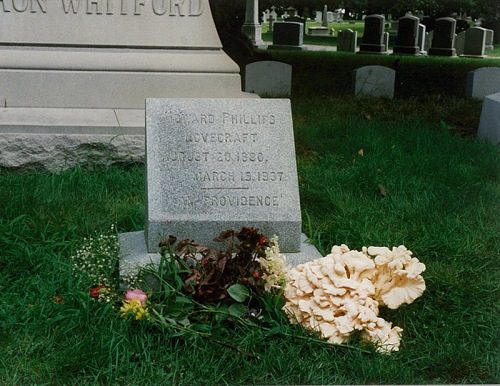 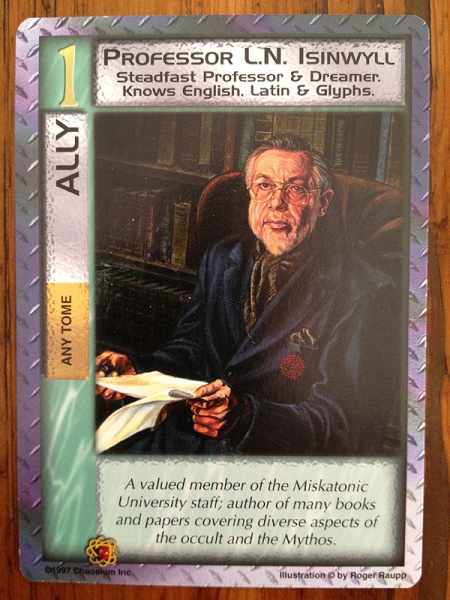 It was always our intention to dedicate this new edition of Horror on the Orient Express to Lynn Willis. The idea for the project was Lynn’s: in the late 1980s Christian Lehmann and I pitched a Continental European Sourcebook for the 1920s, and Lynn responded that he would rather see an adventure set on the Orient Express. We took the challenge, recruiting others to help us. Lynn was a responsive, supportive and insightful editor, and under his vision it grew into a deluxe boxed set.

Lynn infused our first draft manuscript with history and humanity, evoking uncertain times lived on the precipice of a troubled past. Europe of the 1920s and the luxury of the world’s greatest train came alive in his edits, and as authors we were honoured by the enhancements he made. All of the ideas for the deluxe handouts and inclusions were his, and the art direction was flawless.

Lynn retired from Chaosium in 2008 and had been in poor health in recent times, but he has been in our thoughts every day of late as we rediscover the scholarship and wit in his prose. Only Lynn could add as an aside that a deceased archaeologist, when handed a book to assist in translation, would “pause to admire the concision” before getting on with the task at hand.

We’ll still make that dedication, but sadly Lynn will not see it. Charlie emailed on Friday morning to say that Lynn’s struggle with illness was over at last.

His legacy is enormous. On his watch, Call of Cthulhu was first published and then aged through five editions steeped in research and concision. His 1984 collaboration with Larry Di Tillio Masks of Nyarlathotep remains his masterpiece, perhaps the greatest RPG campaign of all time. But beyond the books, Lynn answered every letter he received about the games he worked on, and inspired a generation of gamers with his unfailing encouragement and wisdom. He also mentored scores of artists and authors, myself included. As I write this, I can still hear his voice, with that tone of knowing amusement. He still makes me smile across the intervening years.

In Call of Cthulhu, investigators step up to the mark when heroes are required; we all hope we can do the same. One such hero was Lynn’s partner Marcia, who stood by him throughout. No biography of Lynn is complete without her. Cthulhu may be fiction, but love in this world is real.

Farewell, Lynn; may you lie dreaming. We’ll think of you every day as we guide your train home again. Here are some photos of happier times. 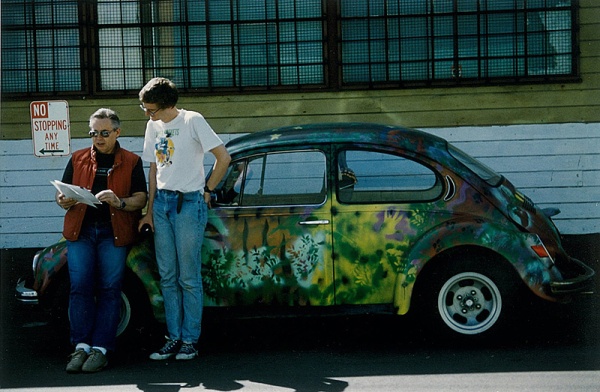 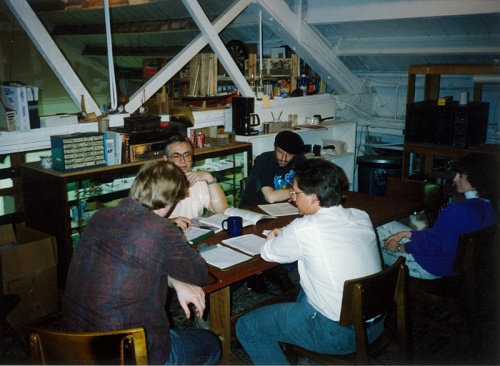 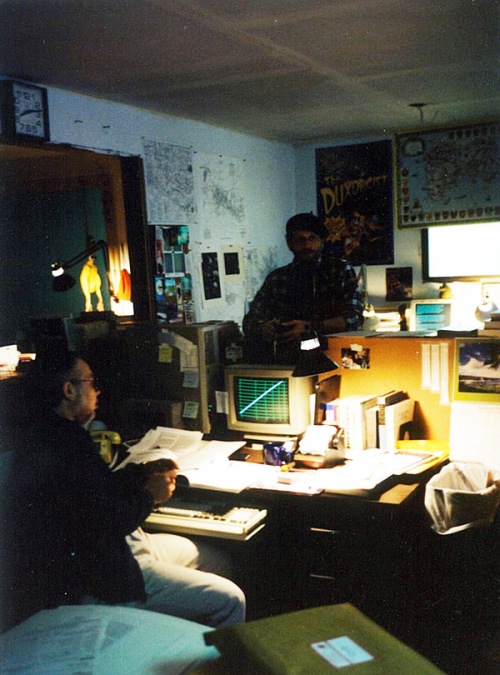 Lynn and Keith at their desks in the comforting gloom of Chaosium, Oakland 1990.

I am currently working on the Traveler’s Companion, a booklet for players. 1920s tourist information for  the Balkans has proven difficult to come by in English, especially with my 25% Library Use. The  area was beyond the itinerary of all but the most  ambitious Western European travelers and Baedekers shed no light for me. I trawled through some earlier material indexed at archive.org and found Through Savage Europe, the adventures of Harry De Windt, the intrepid correspondent for the Westminster Gazette and his trusty “bioscope artist”, the redoubtable Mr Mackenzie. Although published in 1907, well before our 1920s setting, this little volume gave me a lovely vignette of the Orient Express, as our weary and paprika-stained travelers climb aboard just outside of Sofia.  It evokes the train as a rolling Shangri-La and perfectly captures the wonder contemporary travelers felt towards the Express. 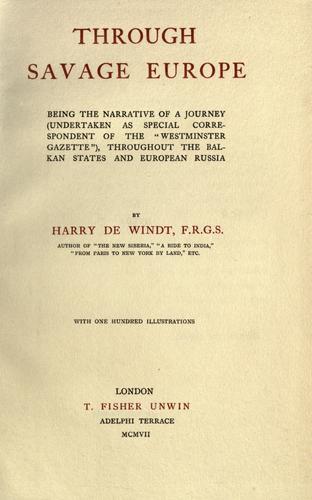 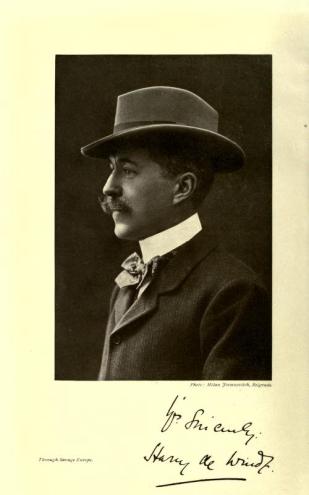 The trailer we wish we’d made

In starting our research we looked up YouTube to see what Orient Express footage was available.  Lo and behold we found quite a few trailers for Horror on the Orient Express. This one by MalleusCalixis uses borrowed music and footage and some great archival photos to perfectly sum up the mood of the campaign, so much so that Mark used it to open the first evening of playtesting. The players spontaneously applauded.

We loved the fact that this campaign that we published years ago has caused so many creative echoes and ripples. Thanks Malleus!

So turn down the lights, turn up the sound, and enjoy.

Tagged as Call of Cthulhu, Fake Trailer, Horror on the Orient Express

Back on the train again

Welcome to Orient Express Writers, a blog about the writing and editing process for the new edition of Horror on the Orient Express for Chaosium. It first squirmed into the light of day over two decades ago. It will return in August 2013, just in time for Lovecraft’s 123rd birthday.

We’re delighted to be boarding the train again, and we’ve invited some new writers to jump on board. The publication would not be possible without the enthusiasm and kindness of everyone who supported Chaosium on Kickstarter. We thought we’d start this blog to share what we’re up to as we chug towards publication and beyond.

Tagged as Call of Cthulhu, Chaosium, Horror on the Orient Express, Kickstarter, Writing