It’s Halloween, and Mark is happily downloading the Call of Cthulhu computer game from Focus Home Interactive. He wrote part of the storyline for French game studio Cyanide.

But, meanwhile in Poland, there are more dark things happening on 31 October… 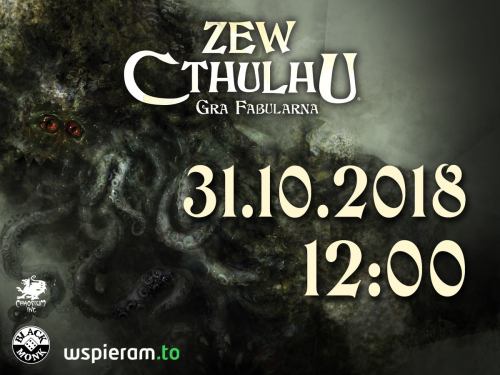 That’s the cover for Zew Cthulhu, aka Call of Cthulhu 7th edition. The Polish crowdfunding campaign starts today, and Mark is contributing a scenario.

Back in May 2018 we were guests at Pyrkon 2018 in Poznan, Poland. We were hosted by our lovely friends from CUBE Factory of Ideas, so a big shout out to Magda, Nutii and Anya! We originally met them and made friends through their work with Polish dice company Q-Workshop.

The first night of Pyrkon was the Convention dinner, held in a convivial traditional restaurant. Brief nerd moment, I got to sit like two people away from Robin Hobb, and I passed her the butter. 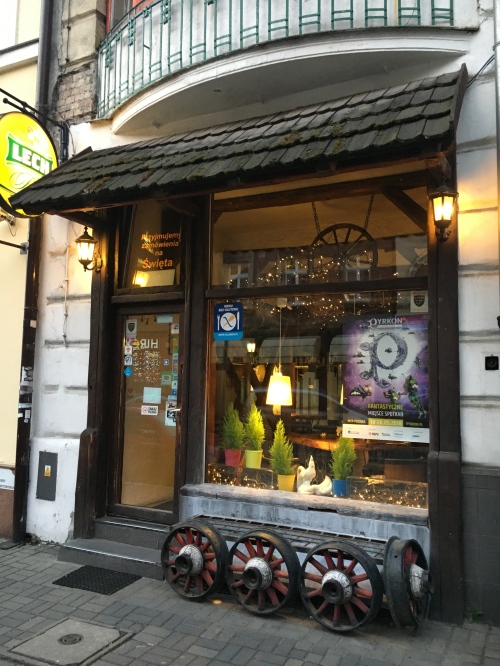 Restaurant where I sat very near to Robin Hobb but was, like, totally cool about it, and didn’t even get a photograph.

Poznan has had an epic history, but now it is a tranquil and beautiful town that certainly knows how to run a great convention. The town mascots are the two goats on their city hall clock and Pyrkon has taken those goats to heart. They are caprine cosplay heroes! 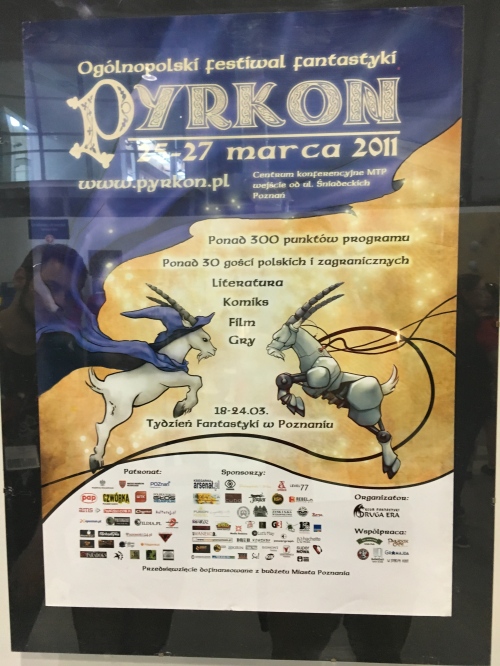 Role-playing arrived in Poland rather late, owing to the Cold War making life a little difficult. RPGs were sheer Western decadence and banned from import. So in the old days people had to smuggle the games in (making them kind of secret and cool) and then be able to read the rules in English, a rare combination of nerddom and heroic resistance. It also meant Pyrkon had an overwhelmingly young crowd, much younger than you’d find in a US or Australian convention where the RPG scene is more mature. However, what the players and keepers lacked in experience, they made up for with enthusiasm. It was a fun-loving and engaged crowd with some Polish quirks – for example people were able to camp on the floors of one of the big halls, turning the whole convention into a kind of sleepover for gamers.

We checked in with Daria and Michal of Black Monk Games, who are the publishers of Zew Cthulhu. 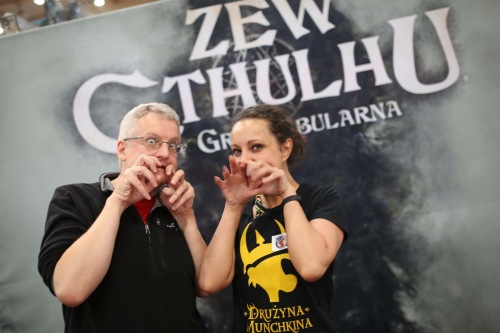 Zew Cthulhu with Mark and Daria practicing their Cthulhu faces

For Arkham Horror, Mark got to try a full body pose. 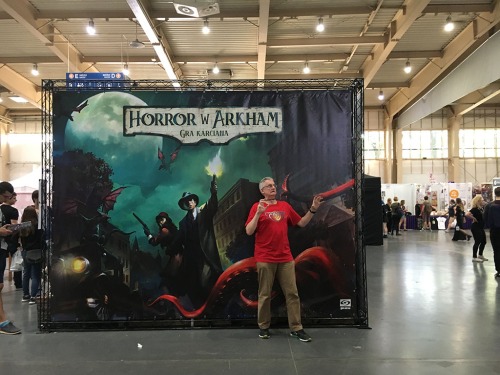 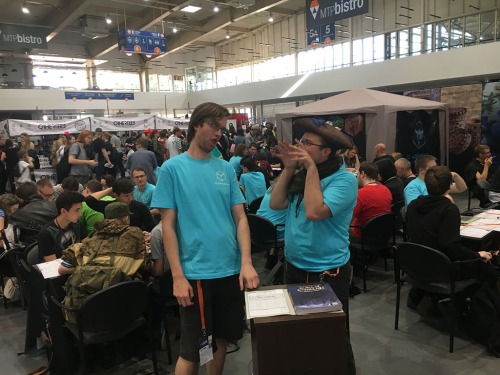 Sadly their dedication has driven them … MAD!

In an effort by us old stagers to show these new kids on the block how it’s done we turned up with John Coleman’s scenario, Black as Coal, which was first run at Cauldracon in 1985 in Melbourne. We ran it for those intrepid few who felt brave and linguistic enough to be scared in English, and relocated the titular coal mine from backwoods US to backwoods Poland. Our players kindly taught us many new words, such as the most popular name for Polish dogs (Azor) and the expression, ‘That’s so Polish!’ The scenario ran perfectly, leaving a trail of dead and mad investigators in its wake. Black as Coal is now going to be part of the Zew Cthulhu so it will be in print again after 35 years, proving that good horror translates into all languages. 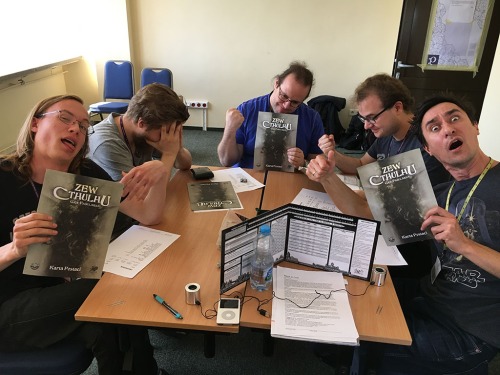 I ran a great game for some of the hard working Q Workshop RPG University team. We ran it after hours because they were working through the day, and it was in a tent in the middle of the convention centre courtyard. 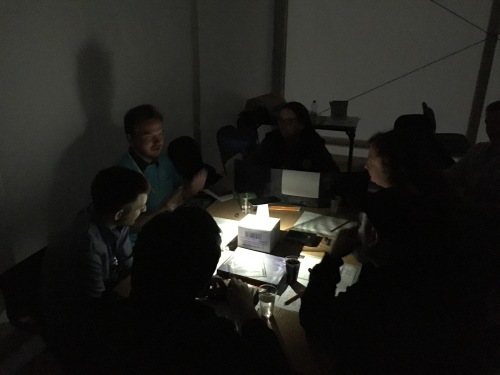 Inside the Tent of Doom

As the sun went down, we gamed on by the feeble glow of my mobile phone and what you can’t see from the picture is that the loudest doof-doof party in Poland is carrying on just outside those canvas walls. Those Polish convention goers sure can party! However, such was the power of communal story telling that we were all drawn into the magic circle and I don’t think one of us noticed the noise until the game finished.

Mark ran a live play of our new French Revolution scenario Love Eterne for a crew of fantastic Polish players, Andrzej, Władysław, Andrzej & Marysieńka (aka Merry, who is one of the translators of Zew Cthulhu). Once again the hidden horrors of La Revolution took their toll. When will the terror end? Only Madame La Guillotine truly knows. 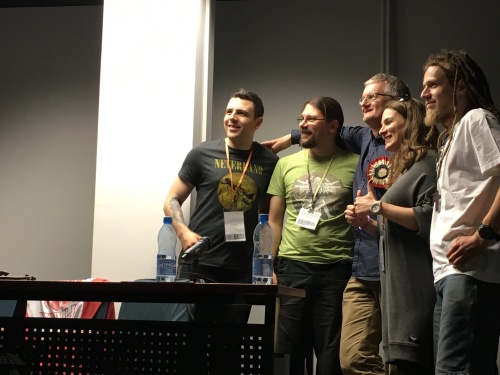 After the show was over, Magda and Nutti took us on a whirlwind tour of Polish history in one day, a tour that took in the evocatively named Castle of Blood Evil which had poppies growing wild, vivid as dr0ps of blood, and World War 2 bullet holes in the walls. 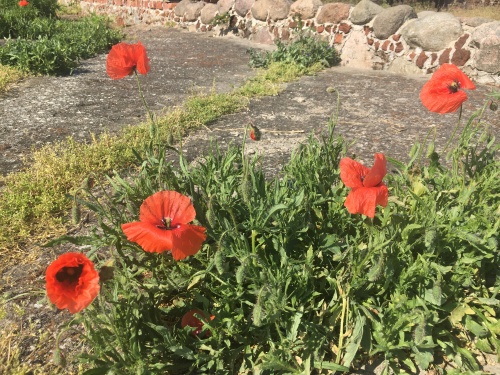 Poppies at the Castle of Blood Evil

However I shall close with this post with the visit to the fabulous steam train museum at  Wenecja.  I got to show off my best ‘Look out below’ impression from Charles Dicken’s spooky ghost story, ‘The Signalman‘. 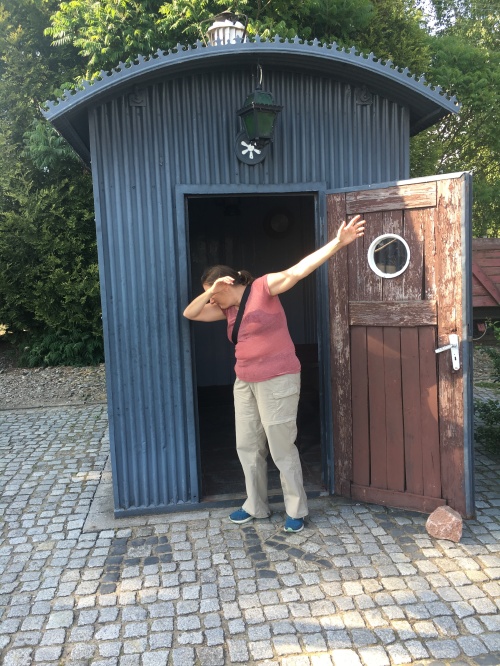 And Mark got to practice his insane face while pretending to drive a steam train. 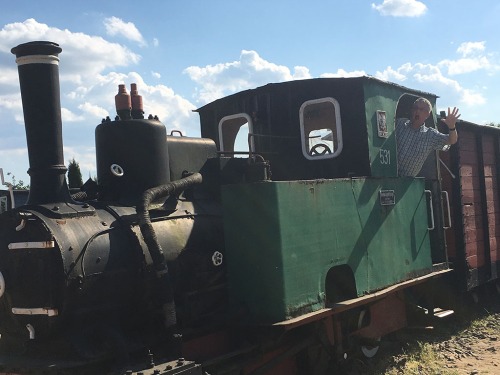 And so the train rolls on. 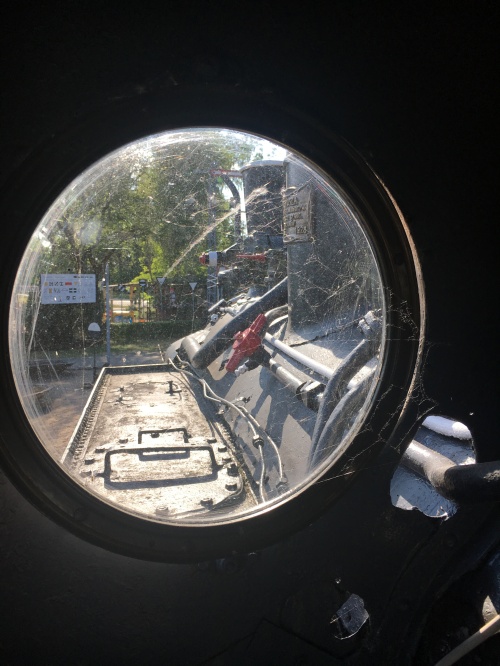 She couldn’t see anything unusual but then the window was quite small. 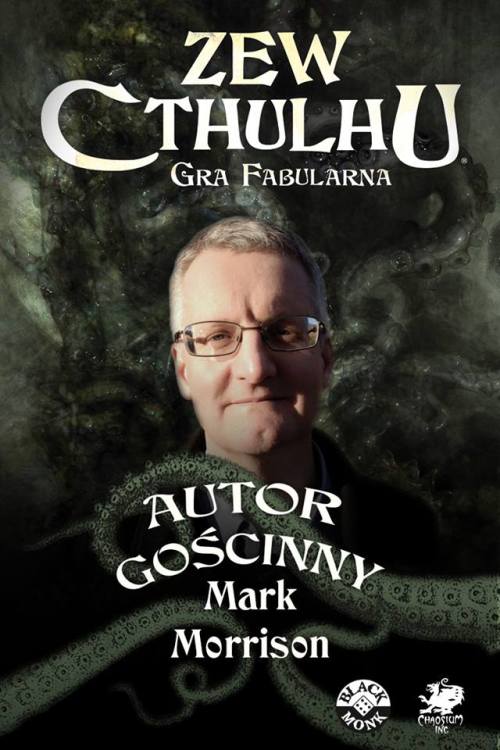