Crowne Plaza Indianapolis Downtown Union Station. The hotel had once been a train station.  After working on the Horror on the Orient Express for so long, anything to do with trains makes us anxious. The staff in the lobby seemed friendly. Or did their smiling faces mask some deep seated, potentially train-related, evil? 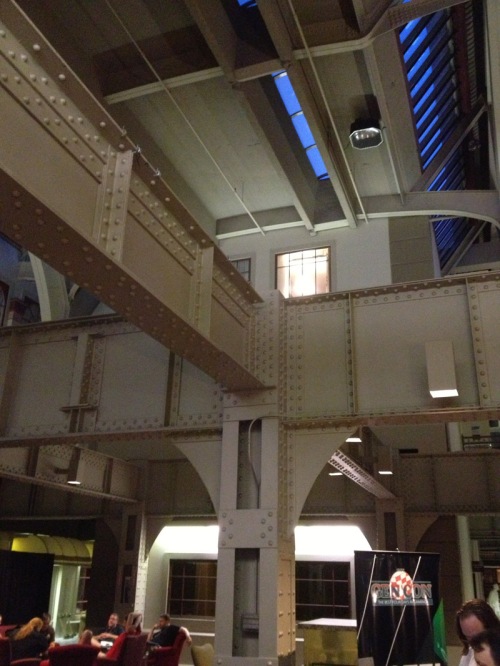 We nervously followed the hand-scrawled directions we had been given to our destination. The door was ajar… 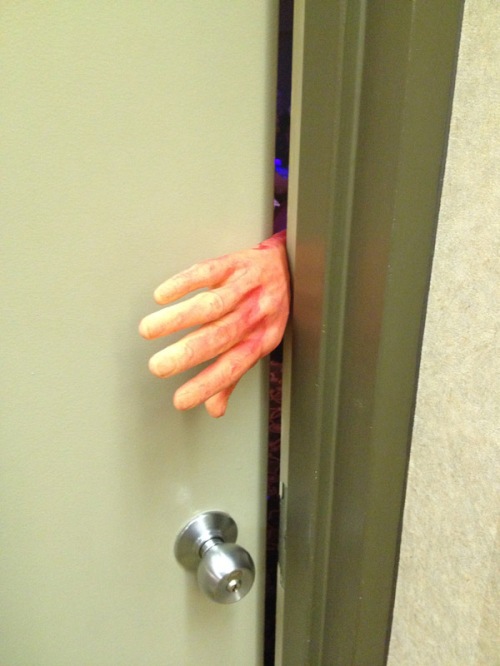 We sensed something was wrong as soon as we arrived.

It was Gencon Indy 2013 and beyond that unhallowed entrance, Jeff “Mr. Shiny” Carey and his stalwart fellow Keepers, Brandon  and Joe, were running the Kickstarter Horror on the Orient Express GenCon Penultimate Trip for six intrepid, and perhaps ever so slightly insane players, Paul, Marc, Samuel, Steve, Graham and Suzanne.

These hardy souls played for five days and nights, and when I mean, nights, I am talking 4 am in the morning. We arrived on the third day to find the players in good spirits, although their investigators were starting to fray at the edges.  The Keepers were displaying incredible stamina as they steamed remorselessly onward to Constantinople.

The playtest was also incredibly useful for us as we were able to make several important edits that will help the final book, based on player feedback.

In the photographs below I am going to show some of the room, players, Keepers, props and handouts. If you are going to play Horror on the Orient Express stop reading now for fear of the forbidden knowledge you may accidentally glean from these blasphemous images.

Jeff and his fellows Keepers had done an amazing job and must have spent hours lovingly recreating handouts and props. It was a huge thrill, and truly humbling, to see our work reproduced in such meticulous style.  The room was atmospherically lit.

The Exit Sign was clearly marked. Why, oh why, did they not use it?

The props were gorgeous. The players informed us in hushed and worried tones that their full-size Simulacrum had a disconcerting habit of reassembling itself when they went out for meals. No matter how scattered its components around the room, when they returned it was always neatly arrayed in the center of the table. 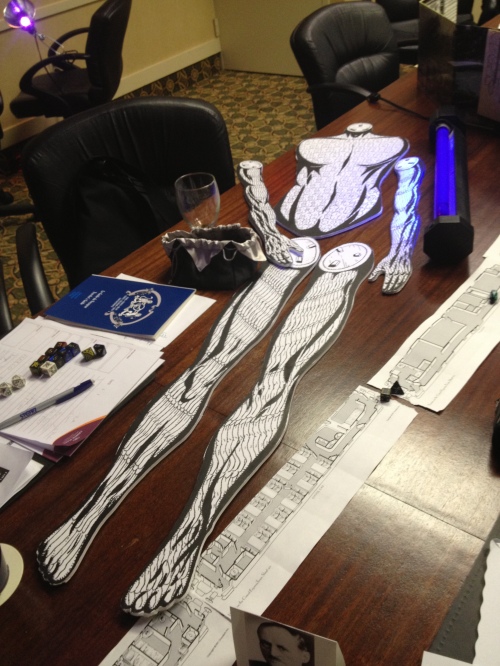 The Unseen Forces were tidy souls.

The handouts were wonderful. Again people, the following image contains a massive spoiler so please do not not look unless you are genuinely never going to play Horror on the Orient Express for as long as you live, and peeking between fingers doesn’t work. By the way, I know you’re going to look anyway so I blurred the particularly blasphemous part.

That was when he wished he had never learned Latin.

In honor of the hotel’s history some of the rooms were immaculately restored Pullman cars. Jeff and his family were staying in one of these cars and in a truly heroic act of generosity Jeff offered his room to Mark to play his Kickstarter Secret Orient Express History game.  This meant neither Jeff nor his folks got to bed until after midnight. It is not often that a Pullman car represents a heart-warming gift to a fellow Keeper.

Jeff’s Pullman Car, with Mark and the Secret History players in the foreground

And yes, these four players now know a secret of the history of the Horror on the Orient Express than no-one else will ever know. You can see by their worried faces that the knowledge is already taking its toll. Thank you, Jeff and family, for sharing the horror.

Graham’s Flickr album for the Horror on the Orient Express contains some evocative photographs of the game, players and Keepers, but again there are spoilers galore so don’t look if you are planning to play the scenarios.