During Necronomicon Providence we walked the streets of Lovecraft’s beloved College Hill and surrounds. In those few days we toiled up and down and all around a remarkably steep hill, both by ourselves and with a Lovecraft’s College Hill Walking Tour led by the inimitable Rory Raven. Under Rory’s able guidance we toured the favorite haunts of Lovecraft and Edgar Allen Poe. We learned a little of the colorful history of Providence, whose founding fathers were a lively collection of privateers, slave traders and determined defenders of religious and personal liberty.

Highlights of the tour included houses mentioned in Lovecraft’s tales. The Fleur de Lys Studios housed the studio of that dreaming artist Henry Wilcox whose work made such an impression in The Call of Cthulhu. Mark was suitably horrified.

The Studio also has a connection to Charlotte Perkins Gilman, author of that superb weird tale, The Yellow Wallpaper. Her artist husband had a studio in the building. Lovecraft hated the Fleur de Lys building, considering it horrible Victorian pastiche, all the more insulting because it was across the street from the First Baptist Church, which he considered a near perfect example of American Georgian architecture. For art enthusiasts, I need to point out that the Providence Art Club, mentioned in my previous post, is on the same street and just up the hill. College Hill is a compact place.

The church is a beautiful building, and its dreaming white steeple could be glimpsed from many parts of Providence. Lovecraft attended the church a few times with his mother and aunts, however he early confessed atheism. Rumor has it that he was expelled from Sunday school after taking the side of the lions against the Christians. However much he disdained organised religion, Lovecraft loved the building and brought all his friends here. He even once sneaked in and tried to play ‘Yes we have no bananas’ on the church organ.

Considering Lovecraft’s early lapse, the church elders were remarkably tolerant of the Lovecraft enthusiasts, and allowed Neconomicon Providence to hold its opening address in the church. This splendid occasion, complete with opening speech by renowned Lovecraft scholar, S.T. Joshi, was spookily interrupted midway through by a ghostly rendition of ‘Yes we have no bananas’.

We visited the H.P. Lovecraft Memorial Square. It was more a memorial crossing, but the thought was there. The sign certainly stood at a suitably non-Euclidian angle. 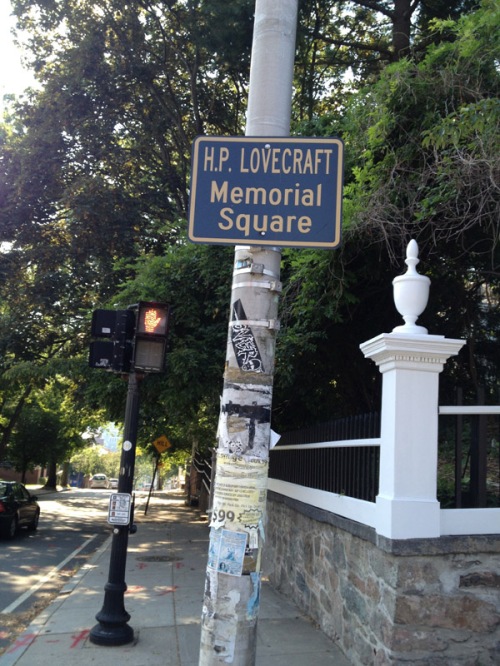 Rory Raven proved so able a guide, both in his literary enthusiasm and love for his town, that on the last night of our stay I led my own, slightly inebriated, ghost tour of College Hill a for some friends, shamelessly poaching from Rory’s excellent Haunted Providence. Touring College Hill in the dark was a perfect farewell.

We visited an authentically hollowed graveyard, shunned the Shunned House, and viewed Charles Dexter Ward’s mansion from a safe distance. 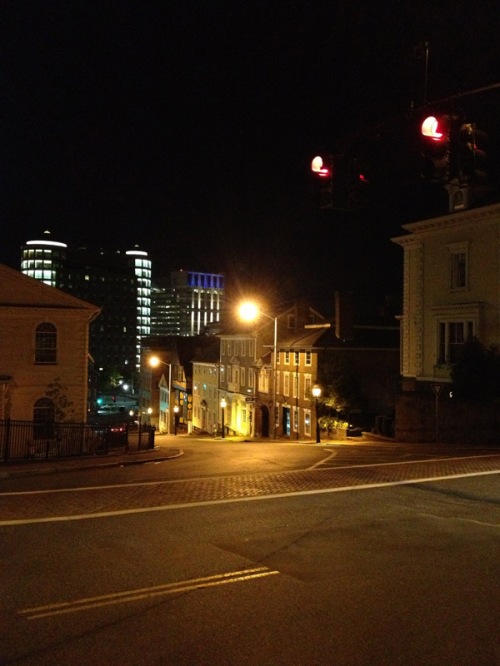 Looking Down Angell Street towards the Arts Club

At one stage I was convinced we were being followed by Brown Jenkins. That is, until our American friends assured me the animal skulking along behind us was a skunk. This was hardly reassuring to an Australian.

As you can see from this final picture, once again returning to Lovecraft’s beloved Prospect Terrace, I think our ghostly homage to Lovecraft and Raven formed a fitting finale.